On the 23rd of March 2015, a news broke out that has left Singapore heartbroken and in deep sorrow. They had lose not just a leader but a father. Yes, Lee Kuan Yew is in fact Singapore’s father. We can’t deny the fact that he was the main guy who built this country and kept building it until his last breath. As he himself puts it:

I have spent my life, so much of it, building up this country. There’s nothing more that I need to do. At the end of the day, what have I got? A successful Singapore. What have I given up? My life.

I went last night, Thursday evening, to pay my last respect to him. We started queing at 11:20 pm and we finished at around 5:30 am (Friday morning). We were told that the waiting time from our position was 7 hours. But despite that we pursued. Even other Singaporeans couldn’t care less how long do they need to wait. 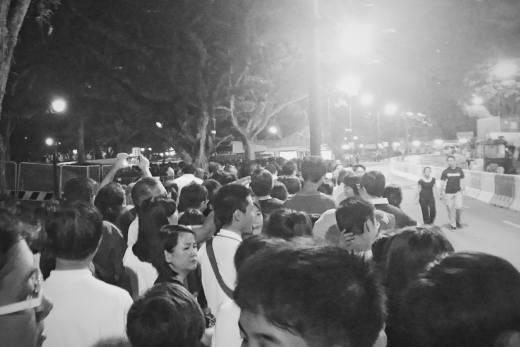 I may not be a Singaporean. But I have deep respect and gratitude towards Mr. Lee. What he did to this little country is really astonishing. He gave up his life, working with the vision of putting this little red dot on the map—a first world oasis in a third world region. And look at Singapore now.

Upon reaching his casket, I can’t hold my tears any longer. I cried as I paid my last respects to LKY. Some may not understand why a Filipino like me is deeply affected by his lost and was willing to endure hours and hours of waiting in line. He may not be a perfect leader, he made a few bad decisions, but with what he had accomplished and what he was able to build, he has earned to respected.

May we all, Singaporean and foreigners in this country, continue to strive and move forward in continuing his legacy.

I send out my deep condolences to Singapore with the passing of their founding father, Mr Lee Kuan Yew.

One thought on “No Yew, No Us”

Kriscel documents everything about her—a mix and match of her personal thoughts, travels and adventures in this small space she considers her personal diary. She hopes to inspire and share a piece of her heart to everyone who comes across her blog.
Follow Kriscel Diane on WordPress.com